skip to main | skip to sidebar

It's here! It's really here!

How happy am I that it's finally ok to walk down the street with fake blood all over your person, eat crazy amounts of bat-shaped candy, and come home to a dvr filled with scary treats? In a word: Totes.

But even before I dust off the wax fangs, I make my yearly plan. The trick is avoid the tyranny of another dreary to-do list. You've gotta mix some easy stuff and a few breaks in there with the high-effort items. This year, I think I nailed it. If I do say. (Please click for an enlarged view.) 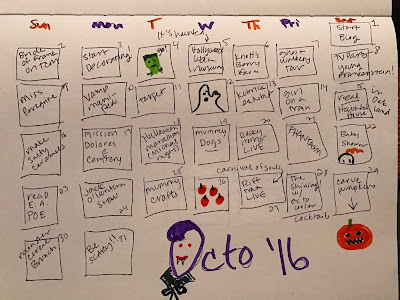 And when I say "nailed it", I mean the content and flow, not so much the artwork and design. But hey, it's that rough hewn, naive look that you can't get just anywhere. It takes a special woman-child Frankenstein combo to dish this up.

Anyway, not pictured here are the other stuff in the routine that make this month great:
-Breezing through Walgreen's, Halloween stores, supermarkets and other establishments to check out their spooky wares on a daily basis
-My weekday rewatching of a Buffy episode, with lunch
-Weekly viewings of Scream Queens, American Horror Story, Food Network, et al
-Perusing my neighborhood and others in search of awesome house haunts
-Halloween specials of regular shows, which, of course, is probably how my obsession began
-Crunchy leaves
-Caramel anything
-Foiling that old sea captain's plans for world domination

Happy H'ween season! We made it. Congratulations.

Ok, so Halloween season doesn't officially start in my book until Sep 1. But! That doesn't mean I'm not slowly beginning to stock up. Just here and there. And mostly oddball stuff that maybe couldn't be considered H'weeny for real, but give you that little everyday kind of thrill. 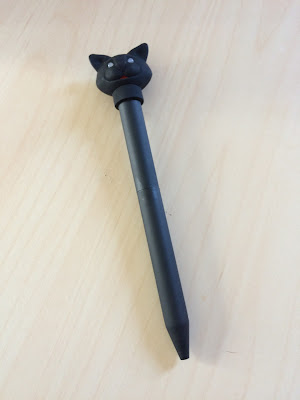 This happy little fellow. Yes, it's just a black cat pen. But guys, it's a black cat pen! (See, it's all in the delivery.) It's just childlike enough without getting too twee, I think. And you haven't even seen the best part yet:

It squeaks and lights up. Pretty great. Even though I'd totally understand if black cats sued for wrongful likeness. (They don't really make that noise and they usually have green eyes, but we'll give it a pass.)

While I was stocking up on back-to-schoo, er, still-in-the-grind supplies, I picked up some highlighters that look like monsters. So much more interesting than the kind that look like cigarette lighters. 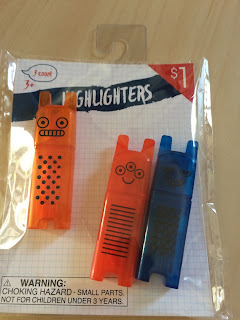 And then I found something special. The bottle opener of my life. I've been looking, pretty diligently and nothing has won me over until this: 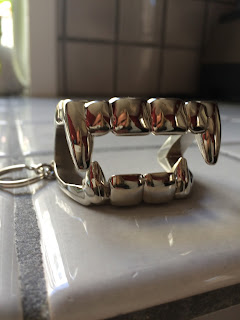 Brilliant, no? Let's face it - if you've got a tiki bar, you've gotta have good barware.

And now....onto the star of the show. I found this thing on the sale table in Japantown - always a good source of hidden gems. So what is this? This, my fiendish friends, is a block covered in hieroglyphics that you chip away at to reveal a mummy! Yes, finally a "My Little Excavator" set. And about time too. Mummies are such cool ghouls and they just don't get enough play in the H'ween world, imo. 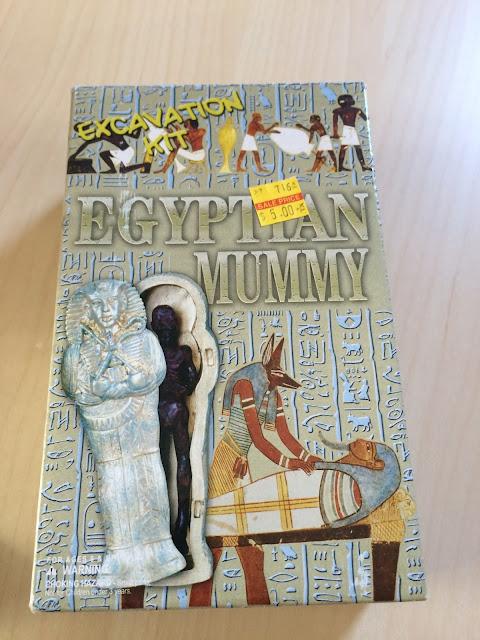 Anyway, this is just a tease for now - I'll be doing the actual archaeology later on in the season. You know, I don't want to peak too early. Happy August, the amuse bouche to the bestest season of the year!

Who's hungry for a BTK?

Last night, I made a bacon, tomato and kale sandwich and it was delightful.

On a darkening and slightly chilly autumn night, what could be better that a toasty sandwich, named after a horrendous serial killer, and a bloody good glass of wine?

First, you gotta prepare the bacon - I baked mine on a rack so that the fat could drip down: 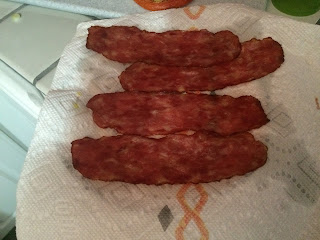 Then, to make the tomatoes extra flavorful (esp since they're not exactly high-summer tomatoes), you gotta give them some oven time as well. Just use the same rack setup as the bacon, sprinkle with green onions, salt, pepper and olive oil: 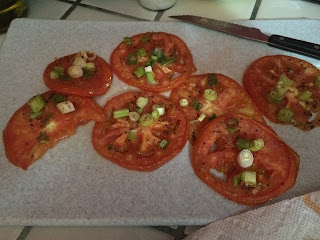 For the kale, same treatment. Into the oven to take away some of the bitterness. On a rack sprinkled with olive oil and S&P, to give it a crunchy chip-like character, making it so much more interesting than plain jane lettuce: 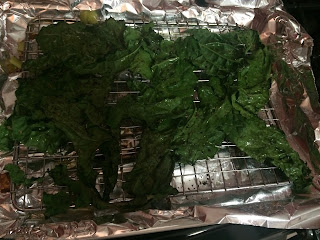 And then, it's just assembly. I toasted some white bread that had some dignity to it (read: Whole Foods brand), spread it with some mustard and sriracha and added the three ingredients above. And wallah: 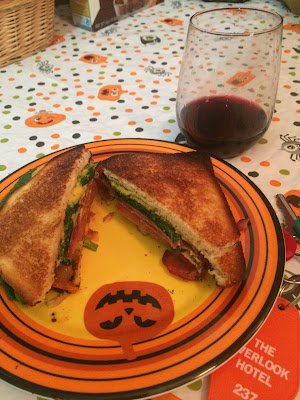 Yes, those are my keys.

Enjoy with your favorite Halloween special.

Another in the series of random brands that embrace the holiday. Is it weird that I love it so much. The claw? Pineapple fronds. I die. 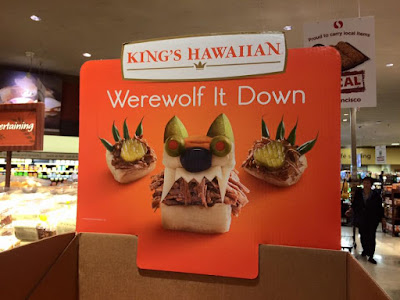 
If your neck of the woods is like mine, you're getting your first small glimpse of true fall weather. This calls for a creepy toast! 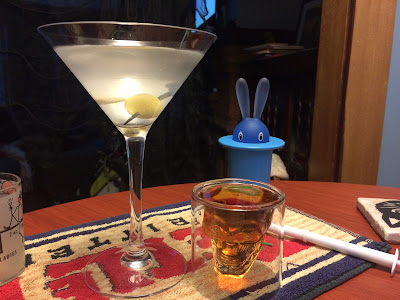 Jetsetters, flying in or out of Terminal 2 at SFO sometime soon? You may be lucky enough to see Kirk Hammett's collection of classic monster toys and a few of his spookified guitars. As always, click for a better view. 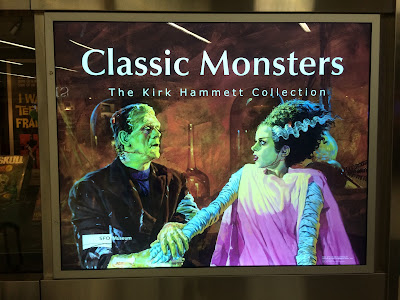 Of course, I imagine it's just a smattering of his total oeuvre, but hey, we'll take it. And I have to say, it's pretty impressive. If you're rich, this is exactly what you should be spending your money on. 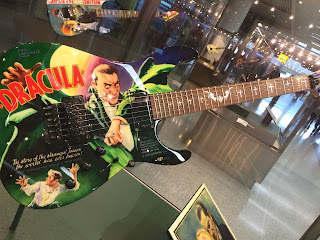 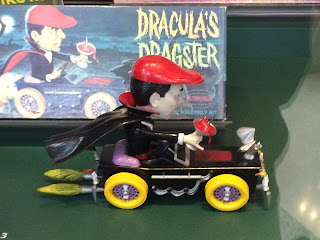 It will make you happy and yet sad because you can no longer get your hands  on a Frankie speaker: 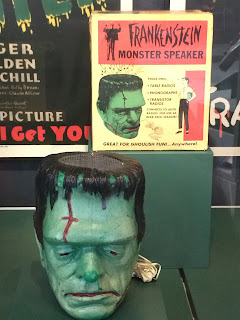 Or a Soaky in the shape of Gill-man, the Mummy, or Wolfy! (Soakys were a bubble bath container from the 60s.) 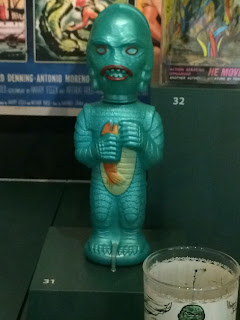 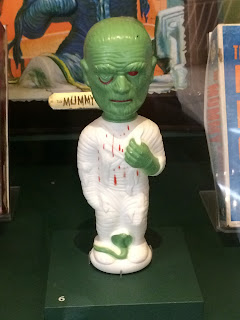 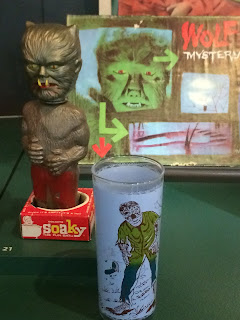 It's billed as a classic monster exhibit but there's also plenty of obscure stuff that's def off my grid. Like this sweet little haunted house. 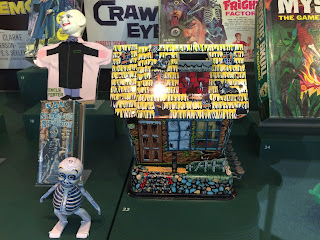 Which just happens to sit cheek by jowl with a Fester hand puppet and a bloated skeleton of unknown origin. (If you know what it is, please let me know!)

Also, this awesome-looking board game and ship from hell thing: 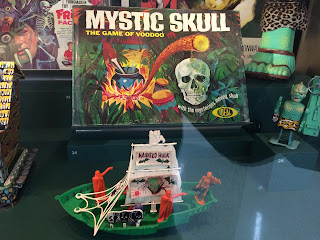 There's also familiar faves like the Addams family and my buddy Barnabas from Dark Shadows (with Uncle Fester horning in yet again): 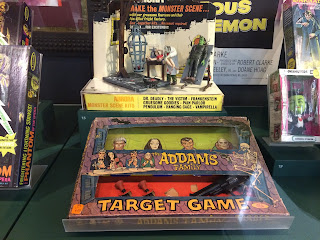 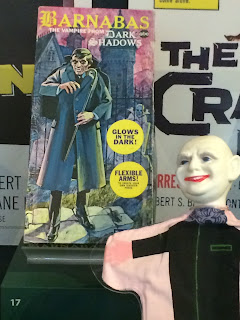 When was the last time you smiled in an airport? I mean, before you take your Xanax. If it's been too long, make your way to Terminal 2 where monsters are on the loose! 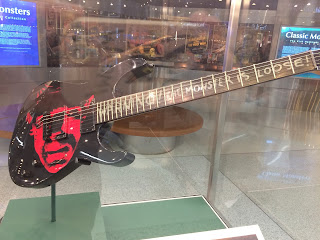 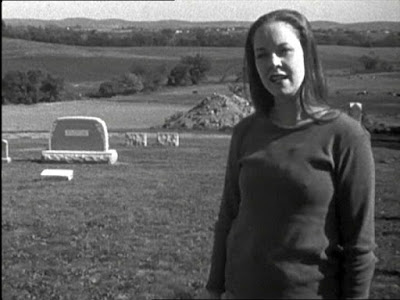 I remember it very clearly. My ex and I were driving along in the Santa Cruz Mountains on a beautiful fall day, talking about creepy shit. And I said to him, “hey, have you ever heard of the Blair Witch?”

He hadn’t. Just that week at work, something popped up about it in a search I was doing about Halloween.  (No, it wasn't work-related, yes, I do this sort of thing all the time.) I told him what little I knew. Little enough. And even littler did I know I had fallen victim to the greatest web campaign in history.

That’s just one of the reasons why I love this movie so much. Soon after this conversation, when I found out it was a movie, I became super pumped to see it.

That’s why we found ourselves on opening weekend, opening night actually, at the Palo Alto Square to see it in a crowd tittering with excitement and no small amount of trepidation. Yes, there was palpable fear that night. After all my years of movie-going, I don’t think I’ve ever felt anything like it. The closest I had come was during the first release of the Exorcist in the 70s, when reports of audience members vomiting in the theater were making big news. But I was far too young to go see it myself. When my teenage brother talked of going, I strongly urged him not to, with the fervor that only a freaked out 8-year-old can muster. I was convinced somehow that he wouldn’t make it out alive. Now, that’s a good PR campaign.

Fast-forward more than 25 years, here was its successor. Almost 20 years since, it still holds up really well. Why?

It’s simple. The premise is easy to understand and the plot never strays far. There are no wild subplots, no love scenes, no “back at the ranch” cutaways. So it’s really something that this bare-bones production can rivet us the whole 80 minutes.

It’s about as close to real as fake gets. The producers left directions and suggestions for the cast, but no script. All the words are theirs alone and the reactions are authentic, because they’re “living” it as we watch. Genius.

No fancy special effects. Just noises and some string-tied bundles. Okay, also a few teeth and maybe an organ or two.. But that’s it! The noises - hooting and hollering and cracking of sticks - are probably the most chilling things is the whole movie. Who can hear the children laughing and not wanna shit your pants? I mean, come on!

It’s funny, at least at the beginning. One thing I love in a horror movie is a sense of humor. A production that acknowledges the suspension of disbelief just comes off as smart and sophisticated. The man-on-the-street interviews in Burkittsville take us from the everyday to the spooky tingles to the bizarre. If there’s a woman alive who looks exactly like a witch in the flesh, it’s Mary, the last interview before they hit the woods.. (She actually signed up to be an intern on the shoot, who knew they’d hit gold?)

It’s got a bang-up ending. I hate movies, TV shows and music that start out great and then fade away. This ending puts a giant exclamation point on the whole experience. The child-size handprints, the screaming, the dimly lit rooms where you just know shit when down...it's all building to that final shot, which is legendary and perfect. And I’m not just saying this because the first time I saw it, a woman behind me starting sobbing. But ok, it helped!

So if you haven’t in a while or maybe never have, I urge you to sit down and watch the Blair Witch Project. 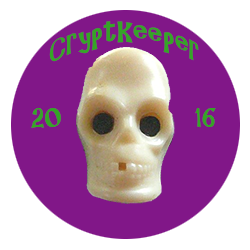 Skaren H.
a Halloween junkie since I was hatched